Landscape and Local Nature Recovery: What farmers need to know

Fife farmer James Oswald is about to see his 20th book published. Here, we find out the story of this unusual farm diversification and how he juggles beef farming with being a bestselling author.

James Oswald really needed to be getting on with clearing gorse last summer, but had to postpone the task. “I had a string of writing deadlines,” he recalls. “The remote-controlled flail mower was just sat there and I was at my desk, looking out, thinking: I want to be outside, not here watching the gorse grow!”

“I’ll go and check the cows on the hill or jump in a tractor and harrow a field if I’m stuck on a plot point and, by the time I come back, the problem has usually sorted itself.”

James’s novels have reached the Sunday Times bestseller lists, with 12 of them following the fortunes of his most well-known creation, Edinburgh cop Inspector Tony McLean. The newest addition to 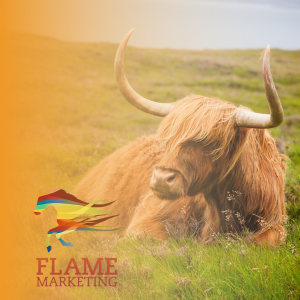 the McLean series, All That Lives, hits the shelves next month published by Wildlife, part of publishing giant Headline.

While his two careers might dovetail mentally, the demands of publishing are such that he’s had to scale back his farming operations, selling his New Zealand Romney sheep and renting out some of his 100ha. He now concentrates on a herd of purebred Highland cows, taking most of the calves though to finishing and selling a few as steers to neighbours, who fatten them for their meatbox scheme.

“Highlands are pretty self-sufficient, but, even so, I’ve only managed to write pretty much two books a year for the past eight years by not doing much else other than farming and writing. I certainly don’t read as many books as I would like to, although audiobooks are brilliant as I can listen to them while I’m out and about. Of course, there are always jobs that need doing on a farm, but there are periods in the year when the livestock are quite hands-off.  Pretty much all I need to do at times like that is make sure they’re the right way up!”

James began writing while at university in Aberdeen, before working as an agricultural consultant in Wales, and later returning to his family farm near Perth.

He self-published his first crime novel, Natural Causes, which having shot to the top of the Kindle charts, attracted the attention of Penguin. One “six-figure deal” later, it was published in 2013.

Natural Causes and the novel that followed, The Book Of Souls, were both shortlisted for the prestigious CWA Debut Dagger Award, and James now sells thousands of copies of every book in hardback and tens of thousands in paperback.

Recently, he learned that the Inspector McLean novel published in February 2021 was the most borrowed book in Fife libraries last year – ahead of household names such as Ian Rankin, Val McDermid and Lee Child.

“I can write pretty much anywhere – even outside in a field – but mostly I write in my office, looking west over the Tay and towards the Grampian Mountains. I used to try to stick to a routine, but I find every book is different. Sometimes I’m really productive after supper and write for three or four hours, then other times, I can get 1,000 words written straight after feeding the cows in the morning.”

He admits to “not being a great plotter”, instead discovering stories as he writes them.

In the case of All That Lives, his imagination was sparked by reading a story in the news about a body, thought to be 700-800 years old, that was discovered during excavations for the Edinburgh tramline extension.

“It got me thinking… what would happen if a couple of weeks later, they’d found another body, buried in exactly the same way, but it had only been in the ground for 30 years. The entire book began with that one question.”

Getting started with this farm diversification

His advice to aspiring authors is not to wait until you know what the whole book will be about to start writing. Instead, take a small idea and “niggle” at it until it becomes a big one.

“A first draft doesn’t have to be good, it just has to be finished – because you can’t start the polishing process properly until you’ve got that first draft. When I was a kid, I always wanted to be in a band, but I never thought I was good enough at playing an instrument. That was the wrong way of thinking about it. I should have joined a band, been bad in a band and got better!

“Ideally, it’s good to write something every day. You don’t have to set yourself a word target, especially if you’re not working to a deadline. But try writing a few sentences of something else, if not your novel, so you get into the habit of thinking about how you describe things in words and that’s the practice – like doing your scales!”

He thinks the last two or three McLean novels have got more difficult to write, not least because he’s getting more demanding of himself.

This versatile – and very busy – author has also written an epic fantasy series, The Ballad of Sir Benfro, and penned another crime series focusing on DC Constance Fairchild, whose first adventure was told in the 2018-published No Time To Cry.

He recalls one book launch in May, at the end of lambing, when he’d had barely a few hours’ sleep each night for weeks in the run-up to publication day.

“The BBC ended up interviewing me, live, on the main national news – even though I felt like a zombie!”