A grower who started a PYO farm diversification generated pick-your-own (PYO) pumpkin sales of £7,500 from 0.5 acres. He says admission fees, catering and other sales could take the income potential for farmers as high as £30,000 an acre.

Philip Handley runs a horticulture business in the walled garden on the Mostyn Estate in Flintshire, growing a wide range of produce. In 2021, he embarked on a Farming Connect focus farm project, exploring the potential for developing a PYO enterprise, with support from Chris Creed, a consultant at agricultural adviser ADAS.

Pumpkins can be direct-drilled, but Mr Handley opted to cultivate seedlings first, and then plant them by hand on 0.5 acres. He admits it was labour-intensive.

“By planting by hand, we made it as hard a job as we possibly could!” Converting a cultivator, such as a second-hand cabbage planter, could reduce labour input. But hand-planting wasn’t without 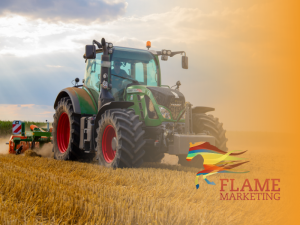 its benefits. “It gave the best results,” Mr Handley added.

“We did some test areas of direct-drilling, and we didn’t produce the same quality of plants in those areas as we did with the hand-planted modules. We didn’t noticeably lose any plants with the modules, and we used less seed – with direct-drilling, you have to plant more seed, because the chances are that you will lose some.”

He planted 2,500 plants in 2,000 square metres. A WhatsApp group of growers and agronomists, brought together by the growers’ network Tyfu Cymru, proved useful.

“There were growers and agronomists in the group, always willing and able to support each other and respond to any questions,” said Mr Handley.

He set aside 13 days in October (the autumn half term and the two weekends leading up to that week) to open the PYO venture to visitors. However, the attraction was so popular that he sold out of pumpkins within six days, without spending anything on advertising – promoting it through social media channels instead.

To keep footfall and traffic to a manageable level, Eventbrite was used for pre-bookings. Mr Handley restricted it to 10 vehicles every 30 minutes. But he did stumble across a slight problem with that system: visitors enjoyed themselves so much that they often didn’t leave after their allotted half-hour.

He kept costs to a minimum – cutting barrels in half for people to use as toboggans to collect their pumpkins from the field, and using his six existing wheelbarrows for the job, too. The pumpkins that proved the most sought-after were the more unusual varieties – the white- and the green-skinned.

Five percent of the crop was white, but if he grew pumpkins again, Mr Handley says he would increase this proportion to 15%.

Offering a selection of sizes is important, too: “People want a choice of sizes, big and small,” he said.

The pumpkins cost £500 for the seed and materials, but that sum doesn’t include labour costs.

“The grower either has to put the hours in themselves, or pay for extra staff; that will be particularly necessary during sales period,” said Mr Handley.

Not only did the pumpkins generate a significant income, but it increased sales of the chutneys, jams, vinegars and cocktail syrups Mr Handley and his wife, Debbie, produce at Mostyn Kitchen 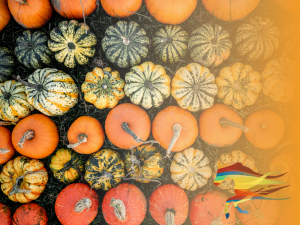 He could also have generated further sales by offering refreshments, but handed that opportunity over to two charities.

Mr Handley says there are many ‘add-ons’ that farmers who run PYO enterprises can provide as further sources of income.

“We didn’t charge admission, but some will charge £10, even £20 a car. How much do people pay to go to a theme park? They are not going to quibble about spending £10 or £20 on an admission fee.

“Farmers have got a mega resource in their land – people want to come onto the farm.”